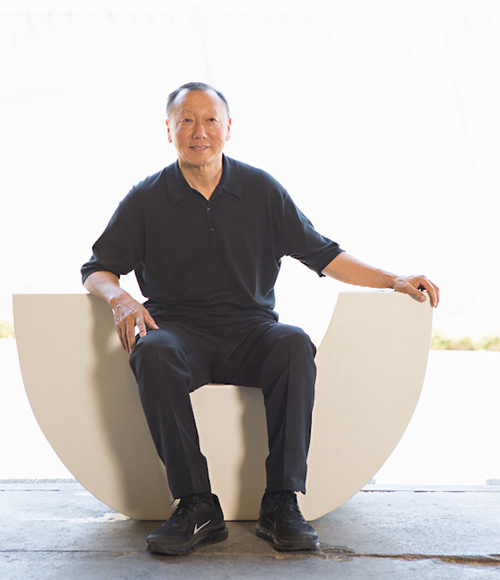 Robert Kuo's own story presents a life that partakes of the best of Chinese and 20th century traditions. Born in Beijing, he moved with his family to Taiwan in 1947. Kuo grew up in an artistic environment. His father, an art professor and Chinese watercolor painter, started a cloisonne atelier where Robert became an apprentice at age fifteen. Although he never engaged in formal art studies, Kuo gained technical expertise and learned about decorative tradition from "hands on" training. As he mastered each of the steps involved in cloisonne from preparing copper bases to enameling and firing the kilns, Kuo absorbed all the basics that were to serve him throughout his artistic career.

While pursuing his studies in Taipei, Kuo assisted his father in the creation of a cloisonne studio. A visit to the United States persuaded the young artist/entrepreneur that the American environment would benefit him, both personally and professionally. In 1973, he immigrated to the United States and opened a studio for cloisonne in Beverly Hills. Kuo cultivated a clientele that appreciated the way he "opened up" Chinese tradition. Utilizing the influences of Art Noueau and Art Deco, Kuo introduced new shapes, finishes, and objects to cloisonne It was during this time that the Smithsonian's Sackler Gallery acquired his "Goldfish Bowl", with its lively naturalism.

In 1984, he erected the airy, contemporary building that is still home to Robert Kuo. Located directly across from the Pacific Design Center at Melrose Avenue and San Vicente Boulevard, the Kuo Gallery quickly became a favorite stop for designers seeking distinctive decorative objects for their clientele.

By 1985, Kuo shifted his focus from working in cloisonne to repousse, the art of hammering decorative relief onto metal. Instead of applying enamel to a copper base, the artist began to experiment with applying different finishes to the hammered base. Kuo looked to China for artisans experienced in ancient techniques. He trained craftsmen to adapt their skills to repousse forms and objects. Today, he spends 4-6 months of the year in China to create new pieces, which are then finished in Los Angeles.

Robert Kuo offers a wide variety of decorative objects, from small tabletop pieces to furniture and large landscaping elements. The work can be seen around the world, from the National History Museum in Taipei to exclusive hotels like the Singapore Ritz-Carlton, San Francisco's Hotel Palomar, Las Vegas MGM Grand Villas and New York Four Seasons. He is inspired by organic forms found in nature, as well as the timeless "motifs" of the Chinese Han and Ming dynasties - often combining them with Deco and Nouveau influences. Sophisticated design showrooms in the U.S. and Europe such as McGuire and Baker Furniture represent Robert Kuo accessories and lighting, while Gump in San Francisco sells special pieces and holds Kuo exhibition twice a year.

While most of his recent work has been in repousse, he has designed a new collection of cloisonne lighting for McGuire. "Robert Kuo is the late 20th early 21st Century representation of the imperial artisan." - Clarence Shangraw, chief curator emeritus, for the Asian Art Museum of San Francisco, Tsui Museum of Art, and The Trammell and Margaret Crow Collection of Asian Art. Avid and enthusiastic collectors await new Kuo designs. He reinterprets the past for the present and future.

A visit to Robert Kuo's showroom is an aesthetic inspiration. Its soaring, sunlit space serves as an appropriate backdrop for timeless, evocative quality of his pieces. This is reinforced by a selection of Asian antiques collected by Kuo in his travels. Elegant displays and tasteful furnishings contribute to an environment that is at once both peaceful and exciting. Perhaps Robert Kuo owes his longevity to his passion for the eternal, for forms that have stood the test of time.